Myspace
Fansite
Aimee Richelle Teegarden (born October 10, 1989) is an American actress and model. She starred as Julie Taylor in the NBC series Friday Night Lights, Jenny Randall in the horror film Scream 4, and Nova Prescott in the Disney film Prom. She is lead role in The CW's upcoming Star-Crossed.

Teegarden was born and raised in Downey California a suburb of Los Angeles. She graduated from high school through independent study at age 16. She is vegan. She was a member of Job's Daughters International and is a Past Honored Queen of Bethel No. 244 in Downey, California. On June 19, 2008 in Anaheim, California, she was awarded "Honorary International Sweetheart of Demolay International" by International Master Councilor Austin Whitaker. She supports Oceana, a non-profit ocean advocacy group.

On August 24, 2007, during the Miss Teen USA 2007 pageant, Teegarden posed the question ("Recent polls have shown a fifth of Americans can't locate the U.S. on a world map. Why do you think this is?") that led to an infamous reply by contestant Caitlan Upton.

In 2008, she starred in a music video for the Hinder song "Without you" alongside Kellan Lutz. In 2009, Teegarden guest starred in three episodes of the CW's’s 90210 as Rhonda, a West Beverly student who crosses paths with Ethan Ward. Teegarden appeared as a guest star on legend of the seeker portraying a teenage girl who just found out she was a confessor. She also appeared in an episode of CSI: Miami and CSI: Crime Scene Investigation.

In 2010, it was reported she had been cast to star as Amanda Miles in the Warmer Premiere and Dolphin Entertainment action webseries Aim High alongside Jackson Rathbone.The show premiered on October 18, 2011 on Facebook being the first "social series" ever created.

In 2011, Teegarden had a small supporting role in the slasher film Scream 4 as a horror loving high schooler. Also in 2011, Teegarden played the role of Nova Prescott, an overachieving high school student in the Disney film Prom. Her character is a senior in high school, bound for Georgetown University  after graduation, trying to put together a high school prom while also dealing with love, heartbreak, and pressure from her parents. She falls in love with the school bad boy Jesse Richter, played byThomas McDonell  in the film.

In May 2011, she was named "TV Actress of the Year" by Young Hollywood Awards for her work on Friday Night Lights.

In June 2011, she became attached to war drama Love and Horrow, which also stars Liam HemsWorth and teresa Palmer In 2011, she also had the role of Abby in BeneathThe Darkness.

In February 2012, it was announced that Teegarden and AnnaSophia Robb had landed a role in Life at These Speeds opposite Douglous Booth The same month, she was cast as the female lead America Singer in the pilot for The CWseries The Selection.[1]The pilot, however, was not picked up to air in the fall. It will be reworked and is expected to be picked up for midseason or next season.[2]A new pilot of the selection was recorded, but the CW decided to pass on that one too. In 2014, she will star in the upcoming CW science fiction series Star-crossed.

Appeared in a 2007 IHOP commercial

Appears in the music video for "Without You" by Hinder.

Did You Know?[edit | edit source]

Member of Looking Ahead.

In 2007, Aimee Teegarden was the one who read the question, "Recent polls have shown a fifth of Americans can't locate the US on a world map. Why do you think this is?" to Miss Teen USA 2007 contestant Caite Upton(Miss South Carolina Teen USA). The question became infamous when Ms. Upton botched the answer with a string of nonsensical and non-germane responses, and the resulting video became a popular Internet meme. Ms. Upton's answer was: "I personally believe that U.S. Americans are unable to do so because, uh, some, uh...people out there in our nation don't have maps, and, uh, I believe that our education like such as South Africa and, uh, the Iraq everywhere like, such as and...I believe that they should, our education over here in the U.S. should help the U.S., err, uh, should help South Africa and should help the Iraq and the Asian countries, so we will be able to build up our future for our children". 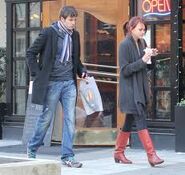 Aimee with her boyfriend

Aime and Bf at Prom
Add a photo to this gallery
Retrieved from "https://fridaynightlights.fandom.com/wiki/Aimee_Teegarden?oldid=6308"
Community content is available under CC-BY-SA unless otherwise noted.