Boston, MA, USA
Connie Britton is an American actress who portrayed the role of Tami Taylor on Friday Night Lights.

Constance Elaine "Connie" Britton (née Womack; born March 6, 1967) is an American actress, singer and producer. Britton is most well known for her roles as Nikki Faber on the ABC sitcom Spin City (1996–2000); as Tami Taylor on the NBC/DirecTV sports drama Friday Night Lights (2006–2011), for which she was nominated for two Primetime Emmy Awards for Outstanding Lead Actress; and as Vivien Harmon in the FX horror-drama series American Horror Story (2011), for which she was nominated for the Primetime Emmy Award for Outstanding Lead Actress in a Miniseries or a Movie. Her most notable films are Friday Night Lights and A Nightmare on Elm Street. She plays the leading role of Rayna Jaymes in the ABC musical drama series Nashville, for which she was nominated for a Primetime Emmy Award for Outstanding Lead Actress and a Golden Globe Award for Best Actress – Television Series Drama in 2012.

ritton was born Constance Elaine Womack in Boston, Massachusetts, the daughter of Linda Jane (née Cochran) and Edgar Allen Womack, Jr., who was a physicist.When she was seven years old, she moved with her parents and her fraternal twin sister Cynthia to Lynchburg, Virginia where she attended E.C. Glass High School. She majored in Asian studies with a concentration in Chinese at Dartmouth College and studied in Beijing during her freshman summer with Kirsten Gillibrand. After graduating in 1989, she moved to New York City, where she spent two years at the Neighborhood Playhouse studying with Sanford Meisner.

While studying at the Neighborhood Playhouse, Britton (then Womack) made her New York theatrical debut in Caroline Kava's The Early Girl at The Courtyard Playhouse. Britton played seasoned prostitute Laurel opposite Cooper Lawrence, who played Joan. Britton's performance, while well received, nearly got her ousted from the Neighborhood Playhouse program, which prohibited students from taking professional employment during their course of study. After graduating, Britton spent two more years working in off-Broadway theatre productions. She moved to Los Angeles after the success of The Brothers McMullen.

Britton had a regular role in Spin City as Nikki Faber from 1996 to 2000. Her character was written out of the show when Charlie Sheen replaced Michael J. Fox as the main character. She had a recurring role on 24 during its fifth season as Diane Huxley, the landlady and girlfriend of protagonist Jack Bauer (Kiefer Sutherland). She co-starred in the indie-thriller The Last Winter in 2006.

Britton performed in the critically acclaimed network TV series Friday Night Lights. Throughout the series' five-year run, Britton developed a devoted following for her portrayal of Tami Taylor, the head coach's wife – described by The New York Times as "something of an icon, a 40-something sex symbol and role model." She was first cast in the film version of the series, Friday Night Lights (2004).Connie Britton at the 2006 Toronto International Film Festival

Britton also was on a few episodes of The West Wing. She appeared in the episodes "Manchester Part I and Part II" and "Gone Quiet" season three, as part of Bruno Gianelli's team. She appeared in the remake of A Nightmare on Elm Street, portraying Dr. Gwendoline "Gwen" Holbrook.[14] She was also featured on This American Life's 429th episode, "Will They Know Me at Home?", in which she performed monologues from David Finkel's nonfiction book The Good Soldiers.

In 2011 Britton starred in the horror/drama American Horror Story on FX as Vivien Harmon, a woman who recently relocated with her family to California after a series of tragic marital and family issues. Unfortunately for The Harmons, the new house they purchase quickly reveals itself to be haunted.

Britton had stated when she wrapped American Horror Story she would be taking a couple of months off to be with her new son, but that she would then begin to re-focus on developing her FX drama collaboration with David O. Russell. The project is currently in "development hell".

On March 6, 2012, Britton signed on for the lead role of the ABC musical drama pilot Nashville. The show centers on Rayna Jaymes (Britton), a renowned 40-year-old country music singer whose star is beginning to fade. Britton's portrayal of the character received critical praise, and she was nominated for a third time for a Primetime Emmy Award for Outstanding Lead Actress in a Drama Series and a Golden Globe Award for Best Actress – Television Series Drama for the first time for this role.

Britton uses her married name as her stage name. She met John Britton at Alpha Delta House at Dartmouth College. They moved to Manhattan together in 1989, married in 1991, and divorced in 1995.

Britton studied Chinese in college. In a 2012 interview on NPR she said of the experience: "I always wanted to be an actor. But when I went to college, I had to fulfill a language requirement and so I thought it would be really cool to do it speaking Chinese. My Chinese these days is real, real shaky. Let's put it this way: These days, my singing is better than my Chinese."

She moved to Nashville when she signed to play in the television drama Nashville.

In 1993, she joined the New York Junior League and was a member of the 1993 provisional class of volunteers where she listed her occupation as "Actress." 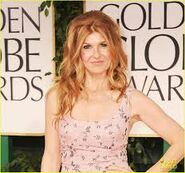 Connie with Taylor Kitsch
Add a photo to this gallery
Retrieved from "https://fridaynightlights.fandom.com/wiki/Connie_Britton?oldid=7620"
Community content is available under CC-BY-SA unless otherwise noted.