Matthew Scott Porter (born July 14, 1979), better known as Scott Porter, is an American actor and occasional singer known for his role as Jason Street in the NBC television drama Friday Night Lights. His character was injured during a football game in the pilot episode and became disabled. The character was inspired by David Edwards, a high school football player.

Porter was paired with Alyson Michalka and Vanessa Hudgens in the 2009 film Bandslam. He performed the song "Pretend," which is featured in the Bandslam soundtrack. In 2010, he played the role of Blake, a law firm investigator, in CBS' legal drama The Good Wife.

He stars as George Tucker in The CW comedy-drama series Hart of Dixie.

Porter was born in Omaha, Nebraska and attended Lake Howell High School in Winter Park, Florida. At Lake Howell, Porter was a wide receiver on the football team and graduated in 1997. Porter attended the University of Central Florida. While in college, Porter sang vocal percussion in an a capella vocal group, 4:2:Five.Porter also worked as a baby-sitter and "didn't have time to party."

Prior to joining the cast of Friday Night Lights, Porter played Matthew in the original cast of the Off-Broadway hit Altar Boyz in 2004. In 2006, he temporarily took over the role of Casey Hughes in the soap opera As the World Turns, a role originally performed by Zach Roerig. Porter also played the role of Colin Thompson, the more visible part of the duo that fronts the fictional band PoP!, in the movie Music and Lyrics (2007). Porter also played the character Rex in the film Speed Racer (2008), which was directed and written by the Wachowski brothers. He played Bobby in the remake of Prom Night and Ben Wheatly in Bandslam, released in August 2009. In the latter film, he co-starred alongside Aly Michalka, Gaelan Connell, Vanessa Hudgens, and Lisa Kudrow. In the same year, he was also paired with The Sisterhood of the Traveling Pants star Alexis Bledel in the romantic comedy film The Good Guy, which premiered at the Tribeca Film Festival.

Porter is a fan of comic books and has auditioned for several comic book hero roles.[8] He is also purportedly a fan of HeroClix. Porter performed and sang the song "Someone to Fall Back On" in Bandslam, and his song "Pretend" was included in the soundtrack. He was part of his high school's choral department and was a founding member of the groups 4:2:Five and Mosaic. He eventually performed for Off Broadway with another A Cappella band named Toxic Audio.

Porter portrayed Randy in the 2010 film Dear John, which was adapted from the novel of the same name by Nicholas Sparks.

Porter plays a lawyer in the medical dramedy series Hart of Dixie alongside Rachel Bilson. The series debuted on The CW in September 2011.

He was in a acapella group in high school called 4:2 Five. They have a number of albums, Scott was actually featured on two of them. He was also a major part of other A Cappella groups, Mosaic, Toxic Audio and The Doo-Wop Shop.

He has two younger siblings. A little brother, Brendan, and a little sister, Ariana.

Is pictured on the brochures and billboards for Pirates Dinner adventure in Orlando, Florida.

Lived in Austin, Texas (filming locations for 'Friday Night Lights' and Rock On') with his girlfriend.

He played the character of Matthew in the original off-Broadway cast of the musical Altar Boyz.

Is a big comic book fan, especially X-men comics. His favorite X-characters are Nightcrawler, Psylocke and Havok. If he were to pick a Marvel hero to play, he'd choose Hawkeye.

Because Scott is such an X-men fan, Taylor Kitsch came to him to ask for tips about Gambit, while preparing for his role in X-men Origins: Wolverine.

Attended the University of Central Florida and was a member of the Lambda Chi Alpha fraternity. 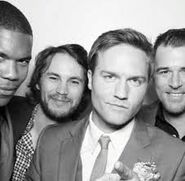 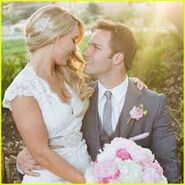 Scott's Wedding
Add a photo to this gallery
Retrieved from "https://fridaynightlights.fandom.com/wiki/Scott_Porter?oldid=7629"
Community content is available under CC-BY-SA unless otherwise noted.